0 item(s) £0.00
SAMS is now a NEBOSH Gold Learning Partner! Read all about it here 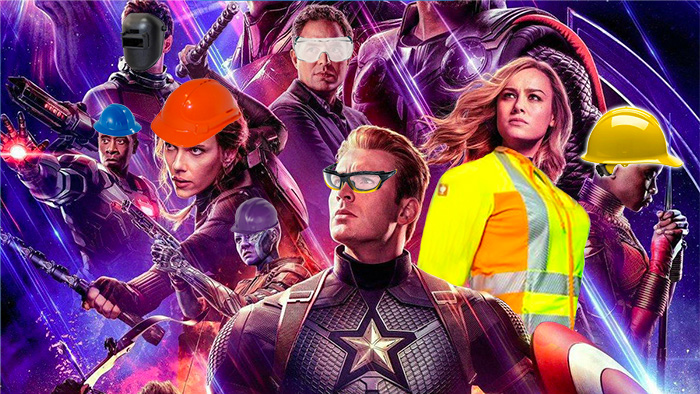 To celebrate the launch of Avengers: Endgame, we’re bringing back our popular feature on health & safety mishaps in the movies. This time, we’re taking on the entire Marvel Cinematic Universe (MCU) – from the first burst of Iron Man to the final strains of Infinity War. If it wasn’t already obvious, there will be spoilers ahead.

Playboy billionaire Tony Stark is the beating electromagnetic heart of the MCU, featuring in both its first and last major instalments. His journey started in Afghanistan in 2008, when he was captured following a demonstration of a new, deadly missile system. Forced to replicate the technology in a cave with bits of his own weapons, he instead created a miniature fusion reactor, powering a suit that allowed him to escape.

The safety breaches are off the charts in this one. Hazardous materials are stacked wantonly around the cave, with no regard for explosives or fire regulations. The door to the bunker appears to be locked from the outside, clearly contravening laws on fire doors and escape routes, while a lack of emergency signage could be deadly if the power goes out. We can also safely assume that ventilation in the space is poor, with no breathing equipment provided to counteract the risk of fumes from welding and soldering.

We presume that Stark’s captors wanted to keep him alive, given that they need him to build their weapon. Yet while the area appears to be carefully monitored via security cameras, it’s doubtful that these supervisors have the proper training to oversee such dangerous work, let alone to react properly in the event of an emergency. If they hadn’t all been slaughtered by blunt impacts and flamethrowers, we’d be sending them right on an SSSTS course.

The Collector, an Elder-being almost as old as the universe, should know better than to do literally anything he’s involved with in the MCU. Seeking the Infinity Stones as the jewels in his collection, he first takes possession of the Reality Stone at the end of Thor: The Dark World, and briefly gets his hands on the Power Stone during Guardians of the Galaxy.

While we never saw how the former was protected, his treatment of the latter stone didn’t exactly fill us with confidence. Opening the planet-destroying orb within touching distance of four strangers and a slave girl, he begins an elaborate monologue about precisely how destructive it is. He’s interrupted when said slave – sick of her captor – grabs it and blows up the building.

The Collector shows a callous disregard for COSHH (Control of Substances Hazardous to Health) regulations here, with no signposting of the deadly Power Stone, no protective barrier or clothing, and no awareness training for any of the people involved. His poor treatment of employees then exacerbates the problem by encouraging them to flout the rules. We don’t know where he is after the events of Infinity War, but we can’t say he’ll be missed.

Ant-Man went through a torturous period of rewrites, and there are places where it shows. Our introduction to the titular hero’s powers is an unrelenting series of set pieces, where an unwitting Scott Lang is shrunk down, half-drowned, dropped through some floors, catapulted through a mid-day rave, hoovered up and plonked on a parked car. The film’s explanation of physics is contravened about five times, but its disregard for health & safety is even more insulting.

Inventor Hank Pym may rate his suit highly, but his road test is baffling. By allowing Lang to bumble his way through the process, he not only endangers numerous lives – Ant-Man’s superhuman strength and lack of control might easily have killed someone – but also risks losing the suit forever, falling into some grate or crevice from which it might not be retrieved.

Pym’s designation of heavy equipment without proper training clearly violates the Provision and Use of Work Equipment Regulations (PUWER). As an experienced scientist, he should also know that breathing apparatus must be properly face-fitted, ensuring a complete seal to protect the wearer from the confines of a vacuum, or from drowning in a giant bathtub. Lang starts the film behind bars, and we suspect Pym will be joining him.

Avengers: Age of Ultron wouldn’t be anyone’s pick for the most sensible or logical MCU plot, but the fight between Iron Man and the Hulk really takes the biscuit. Having been hypnotised by Scarlet Witch and sent to Johannesburg, the Hulk is intercepted by Iron Man in his ‘Hulkbuster’ armour. The pair proceed to tactically fight their way through hordes of onlookers, before plummeting through an unfinished skyscraper.

There are a few culpable parties here. Safety should always be a proactive rather than reactive process, and Tony Stark is clearly guilty of a lack of planning here. While his Hulkbuster armour is ultimately effective, he seems to have shown little regard for the way it would be used, and the amount of collateral damage it would cause. Instead of devising a way to entrap the enraged Hulk, Stark flips him around and fires lasers at him. It’s only by a miracle of convenient scriptwriting that no civilians appear to be killed.

While the circumstances are unusual, Iron Man is clearly in contravention of both PUWER and Control of Artificial Optical Radiation at Work Regulations, and should expect more than a minor dent in his substantial finances. However, city authorities and onlookers also bear some responsibility. In a world of copious supervillains and cataclysmic events, it seems absurd to think that there is no evacuation protocol, or general sense that you should run away from the big metal thing that just fell from the sky.

That the crowds of civilians then stand around gawping at the fight shows either a major fatalist streak or a gap in their awareness of risks, and their ability to take independent action in an emergency. We’re recommending CITB Health & Safety Awareness Training all around – the writers won’t always be there to protect you.

Cocksure neurosurgeon Dr. Steven Strange has it all: fame, money, a nice house and a completely inscrutable accent. Bored by his slate of run-of-the-mill brain surgeries, Strange decides to up the ante by viewing exotic CT scans while driving at night, in the pouring rain, on the edge of a cliff, in a supercar. Shockingly, this lapse in attention causes him to careen off the road, and costs him the use of his prodigious pair of hands.

While dangerous driving is still dangerous however good your reflexes are, we’re inclined to give him a pass on this one. If he hadn’t lost his ability to perform complex surgeries (and thereby his entire identity), he never would have taken his Tibetan gap year and gained his godly powers. Without that story, he’d never have helped Thor in Ragnarok, and wouldn’t have been there in Infinity War to see a future where humanity survives.

Sure, his ashes are currently drifting on a cosmic breeze, and you could question whether we needed to know those odds. But given that he’s slated to appear in another film, we’ll take a leap and assume that Endgame isn’t going to go all Game of Thrones on us. Doctor Strange will be hanging onto that cape for a while yet – let’s just hope he’s seen The Incredibles.

5 tips to keep your workplace safe in the winter

We all have to adjust a bit in the winter months. The weather is one thing, but the change in mood is… Read More