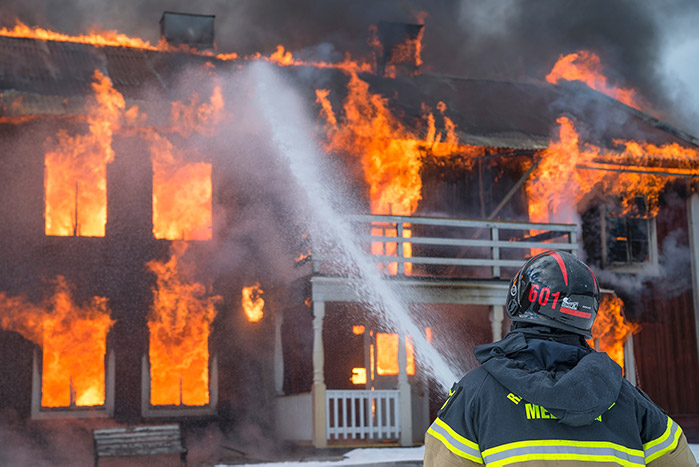 Fire safety is usually about securing routes of egress, stemming the progress of fire and giving people – both on site and first responders – as much time as possible to react and respond. However, the impact of a fire can last far beyond the initial effect on people in the locality, particularly if the tenant and the first responders are not fully prepared.

Depending on the nature of the fire and materials, the destruction of a site or part of a site can affect the future habitability of that site, as well as the health of people in a wide radius around it.  While people are always a priority, businesses and local authorities could do more to consider the effects of fires on the environment, and instil this into their preparation and response.

The core tenets of fire safety should be well drilled into most employees, or at the very least into managers and supervisors. A fire safety assessment looks at the unique fire safety needs of the business, and hopefully flags up any issues that need resolving within the workplace, such as obstructions or a lack of suitable equipment. These issues are then fixed, and rules laid out in a public setting. A fire marshal or responsible person ensures these rules are adhered to, and that everybody knows what to do in the event of a fire, including regular drills and a well-established assembly point.

The safety of people within the workplace – be they employees or visitors – is obviously paramount in the event of a fire, and is the first priority of fire safety preparation. Yet one area where there is not always much crossover is a business’ environmental and sustainability strategy. Despite the fact that more and more businesses are trying to become eco-friendly – both as a cost-saving and PR exercise – the environmental impact of a fire is still rarely taken into consideration.

When a fire does happen, this lack of planning can have severe consequences for the surrounding ecology. While there are numerous laws around the disposal of waste and trade effluent, polluted rainwater, chemical storage and protected areas, these are not always fully adhered to. There can also be confusion over who a business answers to – be it the local authority or Environmental Agency – as well as how laws may change after Brexit. And even if you have policies regarding storage and disposal, you may not have considered the full impact of a fire.

Ideally, passive and active fire protection will ensure that a fire is controlled before it can consume a significant amount of material. When a fire takes hold, however, it burns through all sorts of materials and churns them out as toxic smoke. For most materials, such as the paper and wood common to offices, this will contribute additional carbon to the atmosphere. Many businesses contain other materials however, both inside structures and in the materials they’re made from.

One significant concern is asbestos. Still present in tens of thousands of buildings across the UK, from schools to hospitals to office blocks, asbestos was widely used up until the 1990s for its insulating and fire resistant properties. Fire resistant does not mean fireproof, however, and asbestos is as liable to burn in a major fire as anything else. When this happens, millions of microscopic asbestos fibres can be distributed in the smoke plume and drift on the hot air around a fire, before settling on and around the site.

Fires can also cause structural damage and collapses, which are even worse for catapulting the asbestos dust across large distances, and jeopardising local people’s health. A particularly notable and tragic example is of the World Trade Center attacks, where asbestos and other toxic materials caused serious lung conditions among first responders, who have only recently secured long term health coverage from Congress. This affects not just the people evacuating from a site, but also people who live nearby, with smoke and heat scattering the substances across a wide area.

Breathing in deadly asbestos is not the only potential outcome of a major structural fire. Many older buildings may also contain lead and other toxic substances, which are commonly repaired and maintained rather than being removed. A prominent if not representative example is the recent Notre-Dame fire, which illustrates the disconnect between the knowledge of a building’s contents and the response by local authorities. Local playgrounds were found to contain high levels of lead several months after the fire, and only then were they closed and deep cleaned.

Many companies may also host toxic substances on site, whether in temporary or semi-permanent storage. These could include petrol cans, gas canisters, oil drums, chemical vats or containers and much more besides. In some instances, these chemicals might have been prohibited from use by changes in the law, and been put into storage until such time as they can be disposed of safely. Oftentimes these storage areas are not properly adapted to store these items safely, with fire risk assessments only being carried out on an annual basis or less, rather than as soon as the business’ circumstances change.

There are myriad examples of chemical fires which have caused significant environmental damage, often because of either improper storage or a lack of consideration in the response to a fire. Perhaps the most famous is the Sandoz chemical spill, where a fire believed to be the result of industrial espionage caused industrial chemicals to leak into the Rhine, turning the river red and causing a diplomatic incident. A more recent example comes from a fire at a Jim Beam warehouse, where tens of thousands of gallons of whiskey leaked into a nearby river, killing thousands of fish.

So, what can business owners and responsible persons do to remedy this? One improvement is simply to have the information to hand about what’s stored on site, and the composition of the structures. While fire personnel will generally be conscious of these issues and have a rough awareness of the materials involved, businesses can expedite this process and help emergency services by informing them early on about any hazards. This can then dictate the response, such as preventing the firewater from polluting nearby water sources.

Proper fire detection and protection systems should serve to help both people and the environment. Fire-rated doors, walls and ceilings will all help to slow the spread of a fire, causing less environmental damage, while early detection systems and sprinklers can help to stop it at source. Fire awareness training is extremely useful to ensure that these systems work effectively, such as ensuring that fire doors remain shut, and that fire hazards are minimised. Ensuring that you have the right kind of fire extinguisher for each area is also important, although these should only be used where necessary to escape, and not for firefighting.

It’s also worth considering the benefits and drawbacks of removing these dangerous substances from your site altogether. Asbestos removal can be tricky depending on whether it is loose (lagging, insulation) or inert (tiles, asbestos insulating boards), with loose asbestos requiring strict protocols and often putting entire buildings out of action. By removing it, however, you not only eliminate it as an environmental threat, but also remove the need to maintain it, and provide peace of mind to your employees.

As far as storing chemicals and other substances goes, you should ensure that your policies are up-to-date, and that a fresh risk assessment is carried out anytime the nature of your stored goods or the storage area changes. Ideally, any dangerous items should be kept in a dedicated and isolated storage area, as far away as possible from your other buildings and any water sources. This will ensure that a blaze in your main building cannot then spread to these hazardous goods, and vice versa.

Again, while the crux of fire safety is protecting people on site, the environmental impact of a fire is both a legal and moral imperative. By ignoring or underplaying this aspect of fire safety, businesses are not only undermining their environmental efforts in other areas, but also putting the safety of their site and the people around it at risk. By taking simple steps to stem the damage from toxic materials, you can limit your liabilities and boost your eco credentials.